On this episode of Group Answers, Brian and Chris talk to Kevin Harris about how church leaders can engage members in small group mentoring.

Kevin Harris is the President of Radical Mentoring, an intentional small group mentoring process to help church pastors engage men, build a core group of leaders, and transform their churches. Kevin is passionate about being a resource for church leaders that have incorporated small group mentoring into their disciple-making strategy. He and his wife Susan live in Atlanta with their two sons.

For more than 25 years, Portable Church® has helped thousands of churches launch strong and thrive in a mobile setting. They design custom solutions that fit each budget, vision, and venue. Everything you need to launch a mobile church — an inviting worship space, kids ministry areas, welcome spaces, storage cases, etc — all in a system refined to make it fast, easy & fun for the weekly volunteer teams.

The Group Answers Podcast is a weekly show designed to resource, train, and encourage small group leaders. Each episode considers current trends and resources as well as timeless truths and methods of discipleship. It is hosted by Brian Daniel, a Bible study and discipleship expert in Lifeway’s Groups Ministry, and Chris Surratt, the small group and discipleship specialist at Lifeway and author of Leading Small Groups. 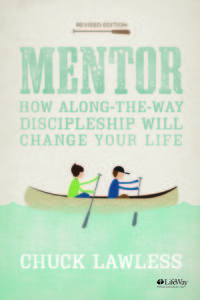 The goal of Christian mentoring is that the mentor lives like Jesus, the disciple becomes more and more like Jesus, and both continue to lead others to do the same. It’s hard to find a loftier goal than becoming like Jesus. Mentoring matters in an eternal way.

Later in this session (and in session 3 of this study) we’ll focus on some of the apostle Paul’s writing to Titus, one of Paul’s disciples among the early church leaders (see 2 Corinthians 8:16-17,23). Titus was to challenge people to invest their lives in other believers, just as Paul had invested his life in Timothy, Titus, and others. Paul expected believers to fulfill this calling because he knew God’s purpose for all believers:

his Son, so that he would be the firstborn among many brothers and sisters

According to this verse, if you’re a follower of Jesus, God is in the process of making you more like His Son. The word conformed speaks of God’s changing us, remaking us so that our lives model Christ. Ultimately, God will completely change us in heaven, so we’ll be like His Son. While we’re here on earth, He moves us in that direction. We call this process sanctification, defined by one theologian as “a progressive work of God and man that makes us more and more free from sin and like Christ in our actual lives.”2 Letting go of sin and living more like Jesus are two critical elements in this transformation.

We know for certain that God alone gives us victory as He makes us like Christ, but we cooperate with Him in this process. There’s footwork for us to do in daily turning away from sin, putting our faith in God, and putting on the character of His Son. These verses reveal the choices we need to make as God transforms us:

Put away all the following: anger, wrath, malice, slander, and filthy language from your mouth. Do not lie to one another, since you have put off the old self with its practices and have put on the new self. You are being renewed in knowledge according to the image of your Creator (Colossians 3:8-10).

Since we also have such a large cloud of witnesses surrounding us, let us lay aside every hindrance and the sin that so easily ensnares us. Let us run with endurance the race that lies before us, keeping our eyes on Jesus, the source and perfecter of our faith. For the joy that lay before him, he endured the cross, despising the shame, and sat down at the right hand of the throne of God (Hebrews 12:1-2).

Ridding yourselves of all moral filth and the evil that is so prevalent, humbly receive the implanted word, which is able to save your souls. But be doers of the word and not hearers only, deceiving yourselves (James 1:21-22).

With your minds ready for action, be sober-minded and set your hope completely on the grace to be brought to you at the revelation of Jesus Christ (1 Peter 1:13).

How does our responsibility to do our part in spiritual growth fit into the concept of mentoring? It applies to both the mentors, who are responsible for their own spiritual footwork, and the people being mentored, who need to be encouraged in their spiritual footwork. Titus had the responsibility of walking in faith as these Scriptures describe, but Paul, his mentor, helped him figure out how to do that. Their mentoring relationship probably encouraged both of them in this effort.

Paul urged his disciples to follow his example and thereby follow Jesus (see 1 Corinthians 11:1). He expected the people he mentored to mature in Christ, and he modeled Christianity in front of them and alongside them as they aimed for spiritual growth. The believers Paul mentored were becoming more and more like Jesus in the process. This is the key to mentoring.

Think about the Great Commission in Matthew 28:18-20, in which Jesus tells us to make disciples. To be like Jesus is to be willing to reproduce ourselves in other disciples, release them to do God’s work (whether as laypersons or pastors), and support them as they invest in others—just as Jesus did. This is a foundational truth: mentors who invest in others as Jesus did will produce other mentors, and lives will be transformed.

Whom do you know who’s growing to be more and more like Jesus?